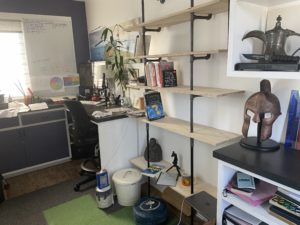 I started a project 3 days ago – building a new bookshelf.

I built in my head… out of black iron pipe with wooden shelves. I planned on making the first shelf low/high enough that it could function as an alter for my meditation/spiritual practice.

I didn’t draw it out on paper – doh! Instead, I decided I’d keep it all organized in my head (with a little help from notes in my iPhone.) Massive mistake!

I planned on it taking one day, Saturday, and thought worst-case scenario, it COULD run into part of the day Sunday.

Of course, there were things I didn’t consider… like I really didn’t know what height I wanted the alter and the other shelves to be. It hadn’t occurred to me that I might have to tinker with it and BE with it so that the position of the alter and shelves FELT right. And because changing shelf height meant swapping out little pieces that are screwed together like iron Legos, I had to make multiple trips back and forth to Home Depot because I kept changing my mind. Ugh. THIS PART TOOK HOURS.

And then there was drilling the holes at precisely the right spot into the shelves, and leveling and stabilizing the foundation so that the wall plates would go in exactly the right spots. This took quite some time… and was accompanied by several mistakes / re-dos.

I was just standing there, looking at the mess in my office and the unfinished shelves, and I suddenly remembered something. On Saturday, when I started the project with my son, I put on one of my favorite Spotify playlists I call “Happy 911”. It was so fun… working and having a dance party at the same time.

I thought, “Why not now?” And in spite of how dark I felt inside, I cued up the playlist. On came Michael Jackson’s “Black or White”… and I had myself a little dance party.

And BAM – just like that, it was like the dark skies parted and the sunshine came in. The difference was massive… in my energy, my mental state, my mood, my emotions. The project went from being one I was miserable about, to one that I could actually have fun finishing. And finish I did…